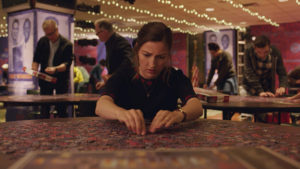 People who know me don’t have to be told I’m predisposed toward liking a movie about a middle-aged homemaker questioning her choices and discovering a love for solving jigsaw puzzles. It’s like this movie was made for me, so take my recommendation with this in mind.

Agnes feels she’s been taken for granted by her family: a hard-working, loving husband who doesn’t seem to need much from her outside meals and companionship, and two adult sons who respect her but don’t know anything about her. 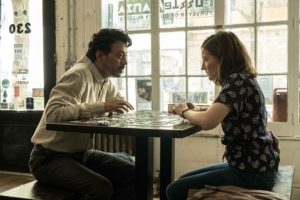 A day after a birthday party thrown for Agnes which she seems to have done all the prepping for and cleaning up after, Agnes takes a few moments for herself, apparently a rare occurrence. One friend has given her a jigsaw puzzle as a birthday gift. She spends the day completing it, and then breaking it apart so she can complete it again.

Dinner is forgotten in these puzzle-solving moments. And when her family expresses annoyance at having been put on the back burner, Agnes begins to resent the role she may have carved out for herself.

She goes to a puzzle shop and buys another. 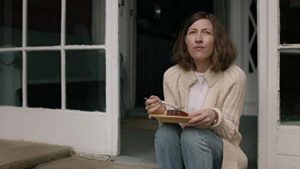 Soon, she is secretly practicing a few times a week with a new puzzle-solving partner—an independently wealthy inventor, recently single, who watches the news all day because he’s fascinated by the destruction.

I saw Puzzle five days after seeing Juliet, Naked, and they are nice complements for one another. Both movies feature middle-aged women questioning their choices, wondering if it’s not too late for a do-over on some of them. I like them both, but I like Puzzle quite a bit more. Whether it’s because of its puzzles theme, because it’s considerably more anguished, or because it leaves a bit more to the viewer to interpret doesn’t really matter to me; it’s probably all three.

“Why do we love puzzles?” one character asks.

“It’s a way to control the chaos,” says another.