By now you already know who Sonya Thomas is — she’s that amazingly petite and slender Korean-American woman (I’m assuming the American part, actually) who finished second at this year’s Nathans Famous hot-dog eating championship at Coney Island on the fourth of July. I first saw her on Jimmy Kimmel and was really impressed. She’s pleasantly nice and silly, like a lot of my friends, and seemed like someone I could hang out with. 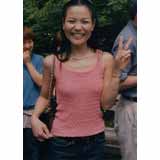 It doesn’t hurt that she’s kinda cute, too. Well, maybe it hurts a little, but that’s not what I’m here to talk about. Sonya’s really good at what she does, obviously, and routinely beats up on men twice or three times her size in the competitive eating arena. I really like her attitude — she seems to understand that in order to be seriously competitive, you’ve got to take the competition aspect seriously, but she also seems to understand that this is competitive eating we’re talking about, not Olympic swimming.

However, what I really hate is this nickname she’s got. “The Black Widow.” It’s in her URL, even. Every freakin’ time she’s spoken about or spoken to, it’s Black Widow this, and Black Widow that, and the name just doesn’t fit! Plus, it’s a name she chose for herself. A good nickname needs to be something someone else hangs on you, unless you’re a professional wrestler, and while competitive eating as a sport is only a step ahead of pro wrestling, the outcome at least is not predetermined, so it is more contest than show, and in this arena, you’ve got to let the nicknames come however they come.

So that’s my first problem. She chose the name for herself. Another thing that bugs me is she doesn’t look like someone you’d call “The Black Widow,” does she? Heck no. She’s too cute. Too girly. Her appearance doesn’t strike any kind of fear into anyone. She’s more like a little kitty than a black widow.

This is a smaller objection, but the Black Widow name is also undoubtedly racial. I don’t mean racist-racial; I just mean race-related racial. I don’t mind that by itself, but because she doesn’t look anything like what a Black Widow should look like, everyone’s ready acceptance of this nickname seems to be related to the fact that she’s an Asian woman. She’s got that exotic, mysterious look that Asian women have when surrounded by Caucasians and Africans. Of course, she’s only got it in its minimal amount, because as I say, there’s nothing spooky about this look. She doesn’t look like she could trap you in her web, or deceive you until it’s too late, or lure you into submitting to her will, or any of these mysterious, exotic ideas men get when they see lovely Asian women. Again, I don’t have a problem with wanting to call an Asian woman “The Black Widow,” but if the only reason you’re calling her that is that she’s Asian, when the name doesn’t match her for a second, well, that’s wrong. A little. 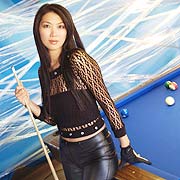 My biggest problem with Sonya Thomas taking this name for herself, though, is that the name was already in use by someone else for ten years before Sonya burst upon the scene in 2003. Yes. There’s already a Black Widow, and she didn’t name herself — in fact, she was reluctant to allow people to call her that, but someone pinned the name on her, someone asked her about it, someone published it, and that was that. She was the Black Widow.

Jeanette Lee, one of the best professional billiards players in the world and certainly the most celebrated, is the only Black Widow I will acknowledge. Look at her! She’s got that look. She looks like someone who, even if someone else had the name before her, would easily wrest that title away because here’s your prototypical Black Widow. When she first tried to make a living shooting stick, she’d appear in pool halls and when the guys tried to hustle her for her money, she’d kick their butts, outhustling them (“I only took money from guys who were out to take my money,” she has said). That’s why a guy who ran a pool hall began to call her that! So not only is it a name someone else gave her, there was a good reason for it. The name fit.

Plus, it’s billiards, which I’ll admit is only a few ladder rungs above competitive eating in the sports world (I love pool, but it’s no sport!), but it is much more suited to having a star named The Black Widow. Look at the nicknames in competitive eating: “Cookie” Jarvis, “Hungry” Hardy, “Yellowcake” Subich. Sonya needs a name like that. How about Blackberry? Sonya “Blackberry” Thomas. See? She looks more like a blackberry than a black widow, that’s for sure.

And it’s not like nobody knew about Jeanette Lee. She had a pinball machine named after her, which was in all the arcades in the country back in the mid-nineties, called Black Widow. And lots of people from all over play pool and would therefore have seen Jeanette’s posters on the walls of billiards halls. Jeanette has endorsed Cuetec cues (one of which I am the proud owner!) for a decade, and Cuetec has done its best to make sure everyone sees and knows Jeanette.

So. Sonya “Blackberry” Thomas, if you’re out there vanity-surfing someday and stumble upon this humble online journal, take it from an admirer. You’re no Black Widow. Do yourself a favor and get a different name. I’ll even pay for the domain name. And set up your website. Whoever’s doing your site now is doing you no favors!

And Jeanette, if you’re vanity-surfing someday and stumble upon this humble online journal, give me a call sometime if things don’t work out with you and your husband. I’ll let you play with my cue stick. 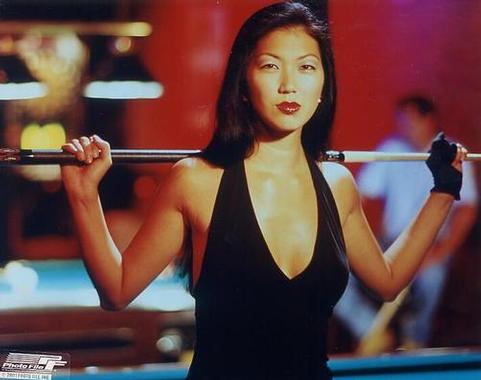