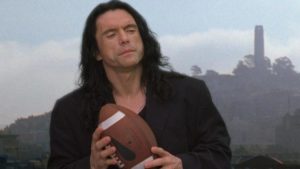 Apparently, sometime in the past fifteen years without anyone’s consulting me, 2003’s The Room supplanted Plan 9 from Outer Space as the worst movie ever made. I didn’t even know this film existed until I saw the hype leading up to the release of James Franco’s 2017 The Disaster Artist.

Yet descriptions could not be believed. I had to see it myself. And midway through my first viewing, all I could think was that while I was utterly fascinated at the amazingly bad movie playing before me, it was so bad that I couldn’t sit through all of it. I had to spread it out over three evenings.

When you talk about how awful Plan 9 from Outer Space is, you can point to twenty things, and your listener will get it. Bella Lugosi died midway through shooting, so they replaced him with someone who didn’t look anything like Lugosi. Director Ed Wood solved this by having Lugosi walk around with his cape covering his face for the rest of the film. In one scene set in a graveyard, the gravestones wobble and topple over, revealing them to be the cardboard stand-up props they are. One woman screams and two different-voices come out of her mouth at the same time. 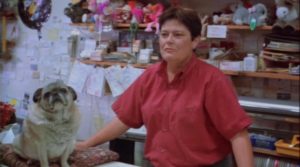 The Room is so bizarrely, bafflingly bad that describing it doesn’t communicate how utterly bad it is. Take one awful, popular favorite scene. Main character Johnny (played by writer-director-producer Tommy Wiseau) walks into a flower shop, wearing sunglasses. He says, “Hi.” The woman behind the counter says, “Can I help you?” Tommy says, “Yeah, can I have a dozen red roses please?” The woman says, “Oh, hi Johnny. I didn’t know it was you. Here you go.” She hands him the roses, already wrapped in cellophane. “That’s me,” he replies in a friendly, sing-song voice, and “How much is it?” “It’ll be eighteen dollars,” she replies before he’s finished asking the question. “Here you go. Keep the change,” says Johnny before the woman finishes telling him the price, followed by “Hi doggie,” as he pats the head of a bulldog sitting on the counter. “You’re my favorite customer,” says the woman. Johnny says, “Thanks a lot,” and leaves.

See? It doesn’t sound very interesting, but neither does it sound really bad, unless you’re seeing it for maybe the second or third time, in context. You don’t realize that “Oh, hi ______” is a recurring line popping up in completely arbitrary places, or that it’s absurd for the woman at the flower shop not to recognize her favorite customer when nobody on the planet could possibly be mistaken for Johnny, except Tommy Wiseau. 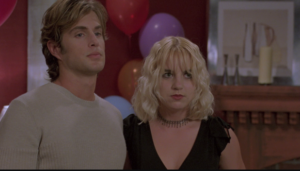 And yeah. The whole movie is pretty much just like that.

For the uninitiated, a quick breakdown. Tommy Wiseau wrote, starred in, directed, and produced this film by himself, paying the six-million-dollar production costs. Wiseau doesn’t tell anyone (anyone!) where he’s from, how old he is, or where he acquired his wealth, and he has a bizarre accent that sounds vaguely eastern European, but you probably wouldn’t put money on it. To hype the film, Wiseau rented a billboard for $5000 per month, and kept it there for five years despite the film playing in only one theater for only two weeks, bringing in $1800 at the box office.

A film critic saw it during its original run and became an instant fan. Word of mouth turned it into a midnight movie hit at one theater in Los Angeles, where it played once a month at midnight for eight years, often selling out. Among the movie’s fans are Paul Rudd, David Cross, Will Arnett, Patton Oswalt, Seth Rogen, Kristen Bell, James Franco, and Dave Franco. The Francos star together in The Disaster Artist, a film about The Room directed by James. 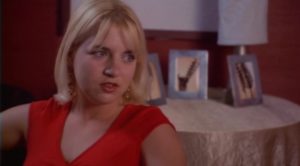 I’ve seen the film three times. Each time it was more charming and more watchable than the previous, but seriously, I can’t just sit and watch it all the way through. I can have it on while I get some work done, while I make dinner, or while I’m goofing off online. It continues to be a horrible, terrible movie with only two things to recommend it on its own merit (and without irony).

The female lead, Juliette Danielle, puts herself fully into a role that she must have known was ridiculous. There is no self-awareness and no wink at the camera, something I have to say I admire. She’s also pretty not in a Hollywood way, but in a prettiest-barista-at-the-cafe way, the kind of pretty movies should make more of an effort to cast because it’s so much closer to real life. Supporting actress Robyn Paris comes across as the only real actor in the film, someone I would seriously think of casting if I ever made a movie.

Holy cow. I have to say this is the worst movie I’ve ever seen, but I kind of like it, and for that reason I can’t give it the lowest score.  I’d rather watch ten hours of The Room than a single minute of Event Horizon.