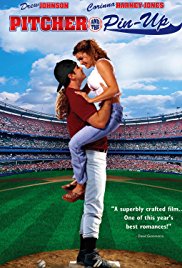 Twelve minutes into The Pitcher and the Pin-Up (originally released as The Road Home), I said on social media, “This may be the worst movie I’ve ever seen.”

The story isn’t just loaded with cliché; it’s an uninterrupted string of clichés from beginning to end. I recently declared The Room the worst movie I’ve ever seen, but at least The Room is packed with stuff you’ve never seen before. I’d much rather watch The Room again. You might have to pay me to spend another evening with The Pitcher and the Pin-Up.

Danny and Melissa are childhood friends who clearly love each other but act like they don’t. They drift apart when one goes to college on a baseball scholarship while the other poses nude for a magazine, hoping it will launch a modeling career, although what she really wants to be is a poet. Someone plays in the College World Series. Someone marries a jerk. They get closer; they grow apart. Life is rather cruel to both, but in their brokenness they discover they have always loved each other.