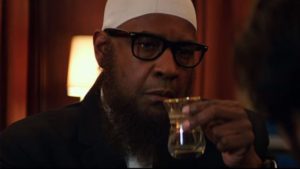 I never saw 2014’s The Equalizer, so The Equalizer 2 is completely fresh snow for me, and it’s not bad if you don’t mind your snow a little on the vindictive side.

Robert McCall is a Lyft driver in Massachusetts, where he reads a lot of books and looks after an old man in a retirement home while lecturing some of the local kids on the value of hard work or something kind of Furious-Styles-sounding. He’s something of a neighborhood vigilante, a very violent, fearless vigilante who takes on groups of young men for assaulting the young women in the neighborhood.

Someone close to McCall is murdered, and there (apparently) aren’t very many people close to McCall, so he goes after the people responsible, only he doesn’t know who these people are. At first.

Everything I feel I needed to know about McCall is covered by the fact that he’s reading Ta-Nehisi Coates’s Between the World and Me right before he destroys a train car full of very bad men. So I kind of like him even if it seems he’s got his fingers in far too many pies. Denzel in badass mode is great if he isn’t allowed to ham it up.

About those pies: the story tries to do twenty things and I would normally be annoyed or distracted or dissatisfied, but I was really just along for the ride.  Yeah, the story is too busy and too involved, but okay. 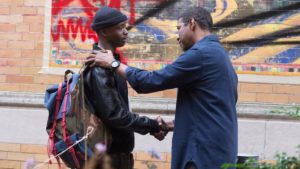 Alas, the film is directed by Antoine Fuqua, and I haven’t seen all of his movies with Denzel, but I’ve seen Training Day, a film I disliked because Denzel hams it up like an Easter brunch. Thankfully, there are only a couple of offending scenes like this here, but there was a moment where I was half-certain McCall was about to proclaim at the top of his lungs that King Kong ain’t got s*** on him. I tolerated these couple of scenes because I like the rest of this film just fine.

You know what? I’m adding the first film to my Netflix DVD queue. And I’d pay to see another of these. Please, though, can we get a different director?