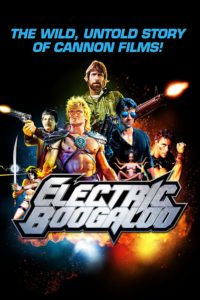 Until I popped this DVD into my player, I don’t think I’d ever heard of Cannon Films, although I consider myself a casual fan of Troma Entertainment, the super-low-budget-film company that seems to be Cannon’s kindred spirit.

Electric Boogaloo: The Wild, Untold Story of Cannon Films is a documentary about the rise and fall of a movie production company owned by two cousins who just loved to make movies. Gifted salesmen, they made a career-long practice of coming up with a movie title, creating a movie poster, showing the poster to possible investors, and collecting the money for production, often before a script was written or actors cast. 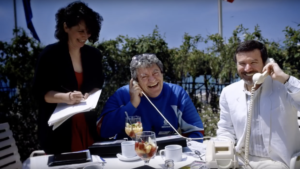 Their figure-it-out-as-we-go approach often meant budgets far lower than expected, story changes in the middle of filming, and bizarre casting decisions. Yet like Troma, Cannon seemed to figure that low budgets meant easier profits, and they could put out a lot of movies in short amounts of time if they didn’t sweat stuff like quality or cohesion. As long as their films had lots of sex, monsters, and explosions, sometimes in the same scene, they knew people would have a good time and come back for the fifth and sixth sequels.

When one of the cousins saw a breakdancer on a Los Angeles sidewalk, he immediately set into motion the production of a movie about breaking. He hired the dancers who would be his stars, hurriedly wrote a story about them, and raced through filming because he heard that another studio was filming Beat Street. For Cannon, it was about getting out there first, not best. Breakin’ and Breakin’ 2: Electric Boogaloo were among Cannon’s first hits, but they were not the last.

Other well-known hit-or-miss-but-mostly-miss titles the company cranked out are the Happy Hooker and Emmanuelle series, three Death Wish sequels, the American Ninja trilogy, almost every Chuck Norris film including the Missing in Action and Delta Force series, Runaway Train, King Solomon’s Mines, Over the Top, Masters of the Universe, Superman IV: The Quest for Peace, Barfly, Invasion U.S.A., and The Texas Chainsaw Massacre 2. At the same time, it is a hilarious yet impressive filmography. Is there a movie fan older than thirty who hasn’t seen at least a small handful of these pictures?

Writer-director Mark Hartley interviews nearly thirty actors, producers, and directors about their memories of working for Cannon, including Bo Derek, Sybil Danning, Richard Chamberlain, Dolph Lundgren, Molly Ringwald, Franco Zeffirelli, Cassandra Peterson (Elvira!), Tobe Hooper, Elliot Gould, Robert Forster, and John Avildsen. Some of them have nothing nice to say about their experiences with Cannon, while others wax a bit more nostalgic. The tone is mostly one of amusement, but many contributors admit that there was something valuable about making these films, and something valuable in the films themselves. 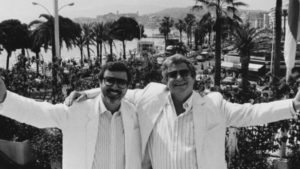 In one segment, the directors talk about how the execs at Cannon promised that they would be allowed to make the movies they wanted, with very little interference from leadership. They don’t seem always to have kept the promise, but you can see why such noted filmmakers as Avildsen, Hooper, Zeffirelli, and John Cassavetes would be willing to work with smaller budgets for a company with Cannon’s checkered past. Zeffirelli says his Otello, a Cannon movie, is the best film of his career.

Would you rather act in a crappy movie or no movie at all? Would you rather direct one with a small budget but creative control, or one with much more backing but much more oversight? These are identity-defining questions, and if nothing else, Cannon offered actors and directors the choice.

This is a funny documentary and making art is a funny thing. Should lack of talent or resources keep you from the joy of creating? I say no, and if there’s some sincerity in Cannon’s love of making movies, maybe there’s something valuable in the art itself.

I laughed aloud multiple times, and am inspired to check out more of the Cannon team’s work.